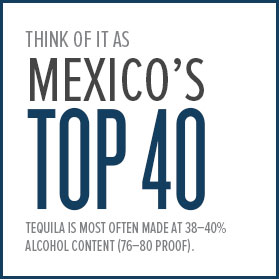 Distillation was introduced soon after the Spanish arrived but the crown officially banned it in its colonies, unsuccessfully in western Mexico.

If it’s Not From Mexico, it’s Not Tequila.

Tequila must be distilled in Mexico to be genuine. Otherwise, it’s just an imitation that is not recognized by U.S. and European laws. Plus, Mexico considers tequila its national heritage property.

Agave is cultivated on plantations for 8 to 10 years.That’s 56—70 dog years, depending on the type of dog.

Which came first,
the name or the drink?

Probably the name. Tequila was first produced in the 16th century near the location of the city of Tequila, which was not officially established until 1530. However it was the Aztecs who first used to the name Tequila to represent the extinct volcano that symbolizes the region.

*study conducted by 100% tequila drinkers and could be considered false under scientific scrutiny or by vodka drinkers.

According to Tequila Health, if you drink a small glass of tequila after eating your dinner, it may help you digest your food faster.

The origin of tequila dates nearly 500 years
The first telephone was invented in 1876. So people went almost 400 years without a late night, embarrassing phone call.

July 24 is celebrated as National Tequila Day in the United States. Is it officially recognized? No. Does it need to be official for us to celebrate? Absolutely not!

The 1940s were a good time for tequila. That’s when the margarita came to the states. A little tequila, lime, juice, orange liqueur, and ice. A huge boost for tequila sales in the U.S.

is the special term for the highly skilled harvesters of blue agave plants. They possess generations of knowledge about the plants, how to select them, and how to handle them. You should thank them.

Almost as many blue agave plants are harvested in Mexico each year as there are people in the United States. (About 300 million). 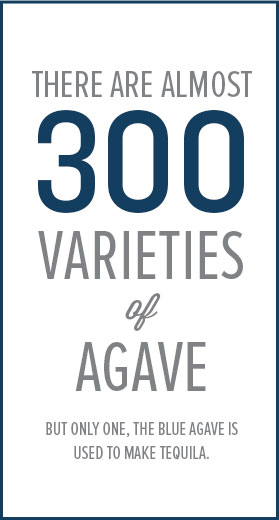 Keep your Olympics!
In 1976, Denver became the first city to turn down hosting the Olympics as voters objected to the potential cost, pollution, and population boom. (Thankfully, they don’t object to tequila.)

Agave has been used as a source of sugar for over 10,000 years
and consuming fermented agave during important ceremonies had been common long before the Europeans arrived and introduced distillation.